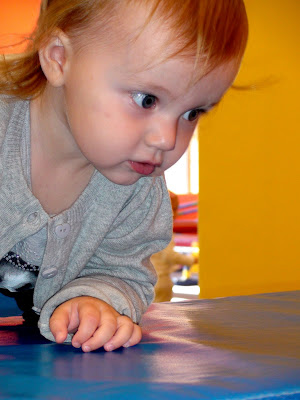 Mom and Dad both have taken the week off—it's their first joint vacation since the spring—so I get to spend all week with them. We've got a lot of things planned, but before all that starts I wanted to bring you up to speed on what I've been up to lately.

For the past couple weeks, I've resumed getting up at night and battling with Dad over whether I'll go back down or not. It's been a tough fight, and we've both had our moments of victory, but the result has been a new routine for putting me down at night. For more than a year, Dad (others too, but mostly him) would give me my bottle in the rocker and I would either fall asleep during that or he'd keep rocking me until I went down, then move me into the crib. That doesn't work so well anymore, so now Dad (or whoever) lets me drink my milk (in a sippy cup), then we read a few bedtime stories (Goodnight Moon, Goodnight New York City, Goodnight Zoo, Goodnight Beach - notice a theme here?). Finally, Dad has me lay down in my crib and he lays down beside me, holding my hand for a few minutes until I fall asleep. It's worked out okay so far, both at bedtime and in the middle of the night. (I like to say "Hand!" over and over to remind Dad what he needs to do.) We both know it's not the final solution, but it's a good transition into whatever the next step is.

And by the way, I don't think I ever mentioned this, but back in September, Mom and Dad finally stopped recording my sleeping, eating and diapering habits, which they'd been doing since I was born. I realize this is very old news, but I just wanted to put it out there since I don't think I did before.

I'll try to throw up a few posts during our time away, so enjoy them and we'll talk when I get back!
Posted by Julia at 10:36 AM