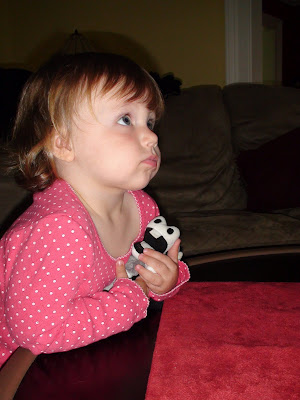 So I've been watching Mickey Mouse Clubhouse a lot recently — a new version that debuted last year on the Disney Channel with computer-animated versions of Mickey and his fans. I love Mickey, Minnie, Daisy Duck, Goofy and the rest, but the character I've really fallen for is Clarabelle Cow. Who is she, you ask? She's a minor Disney character who has popped up very sporadically through the years, and is now being paired with Goofy as his sort-of girlfriend. But I somehow managed to fixate on literally the only character that Disney hasn't exploited yet, so when I was running around the Disney Store two weeks ago screaming Clarabelle's name, Mom and Dad couldn't find a single piece of merchandise with her on it.

But I persisted, and began announcing that "Grandma find Julia Clarabelle Cow." Grandma didn't come through, but Dad did! Thanks to eBay, he found a commemorative stuffed Clarabelle that came out way back in 2000. He and Mom gave it to me last weekend, and at first I didn't know who she was because the doll is in black and white (to commemorate the black and white cartoons she first appeared in). But then it all clicked, and I was the most excited I've been in weeks! 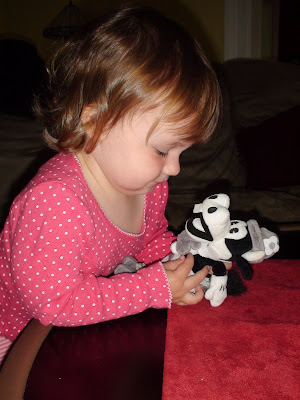 I took her all around the house, giving her a tour of all my favorite things. Dad picked up the video camera as I headed down to my playroom with her:

That Julia table/puzzle I was putting together in the video was a gift from Alec and Isabella for my first birthday, almost a whole year ago. I've really enjoyed looking at it and trying to put the pieces together over the last year, but it wasn't until two weeks ago that I was finally able to put the whole thing together all by myself, without any help from Dad.

I love Clarabelle Cow, and I'm sure it's only a matter of time before the Disney Store comes to their senses and starts pumping out lots of Clarabelle merchandise!
Posted by Julia at 2:58 PM