A flurry of activity 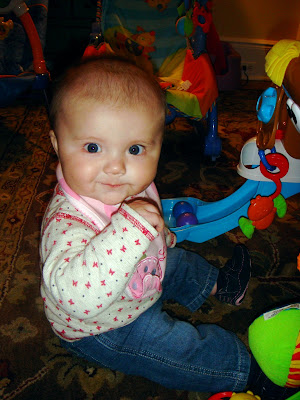 I know, I know, I'm long overdue for an update. But everytime I sat down to write one up, there was another distraction. Like yesterday, my parents wanted to me to look outside and watch my first snow flurries. My reaction was eh, though I did perk up a bit later that day when we went outside and I could actually feel them on my face. This morning, however, was a different story entirely. I looked outside and there was snow everywhere, and more of it falling in big, fat flakes! Now that was impressive, and worthy of a squeal.

Then yesterday afternoon, Mom whisked me off the mall with Babcia and Dido. She tried to show me Santa Claus, but I was more interested in the computer monitor they were using to display the digital photos they took of Santa. That's what I want for Christmas! (The monitor, not the photo with Santa.) 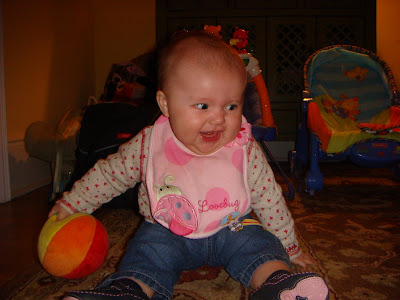 So at long last, it's time to recount my time alone with Dad for much of last week. He took off from work for a few days, which meant he watched me full-time and gave Babcia and Dido a breather. He certainly amped up my playtime—I can always count on him to fly me around the house, throw me up in the air and even (don't tell Mom) turn me upside down on occasion— but there are a few things that he needs to work on. First and foremost, he somehow managed to screw up my oatmeal (all he had to do with mix the oatmeal with some formula; it's not brain surgery!). Also, he's no good at getting me down for naps when I'm obviously tired and cranky (Telltale sign #1: I rub my eyes. Telltale sign #2: I start whining and crying).

Otherwise, though, we had ourselves a wonderful time. We had some nice heart-to-heart talks, like this one:

And we even rolled one of my balls back and forth. Well, we tried to, at least:

Don't worry, I did throw the occasional fit and managed to came up with a couple other mischievous wrinkles. For the past two months, I've been patiently sitting in my pink papasan seat each morning while Dad takes a shower. Well, enough is enough and I'm getting bored, so now I spend all my time trying to lean forward and wriggle my way out of there. 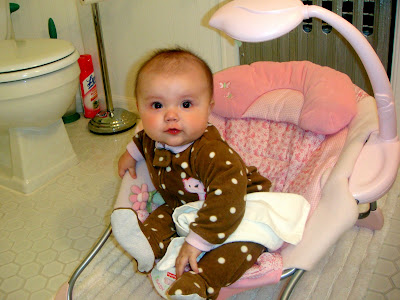 He'd better come up with a new plan, because I'm going to figure out how to get out of here one of these days!

By the way, you're probably wondering about the outcome of our latest late-night standoff. I won the Saturday night battle, staying up from 4:45 a.m. until 6 (and crying for much of that time), until Dad finally brought me into bed with him and Mom to sleep another 30 minutes. But once again, Dad won the war, as I slept through the whole night last night. Don't get too cocky Dad, because a rematch is always just around the corner...
Posted by Julia at 8:14 PM