Maybe I'm allergic to the holidays or something. If you recall, I came down with a fever on Halloween night. Then I got another one the night before Thanksgiving (I blame the flu shot and other various boosters I got that morning at the doctor's). It peaked at 103, and my Dad, who had planned on driving us down to Grandma and Grandpa's after my first feeding Thursday morning, quickly realized that if I was going to be getting up every hour or so, there's no way he would be alert enough to drive if we waited until morning. So we all piled into the car around midnight on Wednesday and headed down. Mom and Dad said it wasn't as eventful as last year's trip down for Thanksgiving, when they hit a deer, but it was a memorable first Thanksgiving nonetheless.

My fever was gone by Thursday, but I was off my game all day and slept much of the day (including most of Thanksgiving dinner). But come Friday, I was my usual cheery self, and basking in all the extra attention. There was so much to do. First, I perused all the Black Friday advertisements. 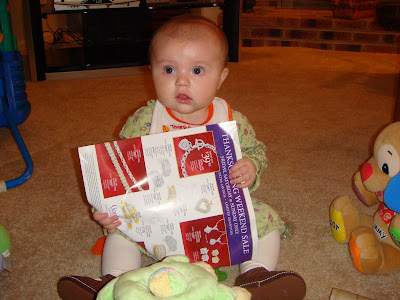 Then I let Grandma put something silly on my head. 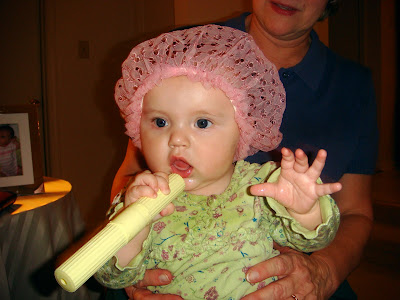 After that, I think Grandma got confused when Mom told her that I eat apples now, because this is what she gave me. Where's the jar and spoon, Grandma? (Just kidding, she gave it to me to keep my teething gums occupied.) 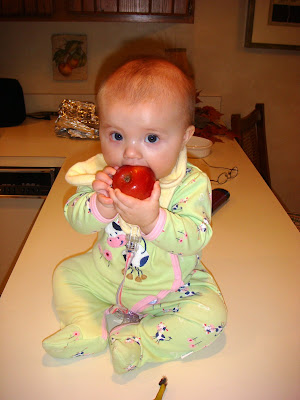 Major kudos go to Grandpa, who was a master all weekend at getting me down for naps, something that's harder than one would think (just ask Dad!). Grandma's pretty good at it too. Before I knew it, it was Saturday morning and time for me to go back home.

Little did I know that even more excitement awaited me that weekend...
Posted by Julia at 9:45 PM