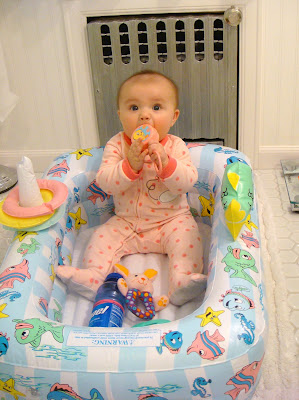 All is right with the world once again, because Mom's home from her trip to D.C. It was only one night, but still, I missed her (or at least, I was happy to have her home). On top of that, Dad had to stay at work late the same night, so I spent extra time with Babcia and Dido, who put me to sleep last night (and did a good job - I slept for 10 1/2 hours straight).

The Christmas tree that sprouted in our sun room wasn't the only big change in the house. The pack 'n play, which the tree displaced, has been temporarily relocated to the basement, but my swing has been packed up and shipped out to the garage (I still have a few more pounds before I outgrow it, but I don't really like it that much anymore, so I have a feeling it's gone for good). And on the third floor, the pink papasan seat that I had been so anxious to wriggle out of these past couple weeks, is also gone. In its place, they've put an inflatable bath tub for me to sit in and play with my toys so they can keep an eye on me while they're in the shower. 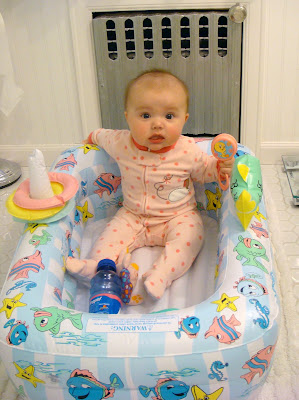 You could also call it an inflatable toilet, since I tend to dirty my diaper whenever I spend time in there. So far I'm enjoying myself, but I bet in a few weeks I'm going to learn that it's fairly simple to escape when you set your mind to it. Then we'll have to see what they come up with. It's like an ongoing chess match between me and them.
Posted by Julia at 9:49 PM