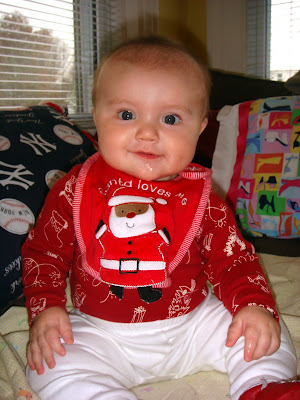 Just as I was getting ready to complain about my lack of emails, I received one from Aunt Paula, who has a lot on her mind this week.

What do like the best about your pretty Christmas tree?
The lights, definitely, followed closely by the ornaments. If only Mom and Dad would let me get close enough to touch them...

Have you taken any of the ornaments off yet?
Of course! During my photo shoot in front of the tree last month, they let their guard down and I was able to snag one and start chomping on it. Dad said that next year he'll only be putting out ornaments that aren't breakable, because everyone expects that by then I'll be running around and likely causing all sorts of trouble. 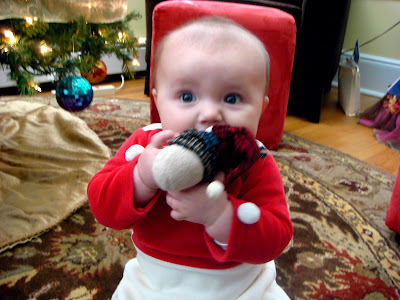 I know you said that you were not going to sit on Santa's lap this year to put in your order. How do you think he is going to know what to bring you?
He's a smart guy, so I'm sure he'll figure it out.

Do you plan on putting out some formula for Santa to drink?
No way. Do you know how expensive formula is? Milk is much cheaper. And I heard my Dad say something about making Christmas cookies, so maybe I'll put some of those out for Santa too.
Posted by Julia at 9:51 PM