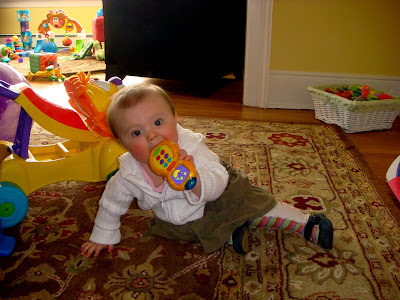 I had a nice, leisurely weekend with Mom and Dad (we don't have many of those, and apparently we won't be having another one for awhile). And now I'm relaxed, refreshed and ready to tackle some Ask Julia questions. Aunt Rebecca has sent in a bunch of them:

Diana and I just returned from L.A. and the West Coast. You need to ask your dad to take you out there one of these days.
He's actually going out there for work in two weeks. I wish I could go because I'd like to try surfing after my successful swimming lesson last week.

A baby as cute as you should be in the movies, although that would entail a certain amount of work. Just think - you could be a star and get your own star on Hollywood Blvd. Are you interested?
When we were at the mall last week, my parents were approached by someone offering their agent services. Of course, this person approached every baby, which hurt my feelings. But I asked Dad about becoming a star and he said he won't allow it. Apparently he has some horror stories from work.

Let's see. You recently got a passport. Have you been learning Ukranian for your vacation? Maybe you'll be going there for your own vacation.
I don't think so, although there are beaches there. I'm pretty sure we're going somewhere in the Carribean.

Or maybe even the French Riviera? After all, bathing suits with flotation devices should be for ultra cool places. C'est magnifique!
Mom offered to take me to Cannes if Dad ever has to go there for work. He's not going this year, but maybe in the future. I'd love to go, as I hear great things about French fries.

Congratulations on the new tooth. What kind of new foods have you been introduced to now?
Thanks! The tooth has just come in a little bit, so my diet hasn't changed too much. But I did sample stage 3 baby food for the first time this weekend. It requires a little bit of chewing, which might take some time for me to figure out. And those puffs that I talked about Friday are a new addition to my diet as well. 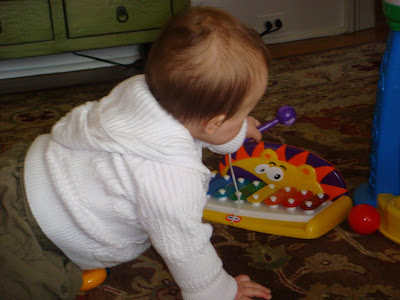 And here are a couple questions from Aunt Paula:

When do you go to swimming lessons?
Babcia takes me on Monday mornings, which means I'll be going again tomorrow. We go to the new Children's YMCA in town. They offer lots of other classes too, so I think I'll be spending a good deal of time there in the coming years.

Are you still going to music appreciation?
You mean Music Together. I'm between semesters right now, but we start up again in other week or two. In the meantime, I'll still feeling the beat...more about that later this week.

Do you have anything planned for the weekend? Or are you just going to rest?
It was a very restful weekend for Mom, Dad and me, but we still made sure to take photos and videos. So you all have lots to look forward to this week. Keep checking back, and be sure to send new questions my way.
Posted by Julia at 11:28 PM