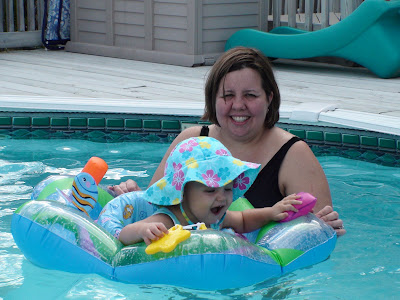 Michael Phelps isn't the only one who knows his away around a pool. After visiting Audrey and her family in Connecticut, we spent time with Aunt Ileana and her kids Lucie and Andrew. They have a backyard pool, so I went for a dip with Mom. I was finally able to try out the floatie device that Mom and Dad initially got for me (they had ordered it before they found that super-compact one with the canopy that we took to Turks and Caicos). 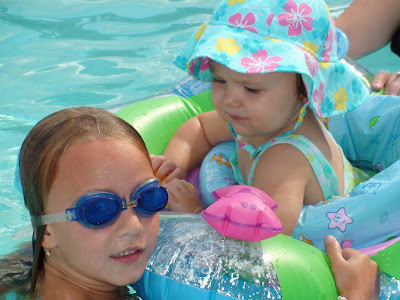 Lucie was nice enough to let me play with her inflatable pool toys, including a dolphin and an alligator. She also kept entertaining me by doing handstands underwater. I would watch her feet poke out of the water after she went under.

When we dried off, I also had a blast running around their big backyard with Lucie. I just kept squealing and squealing! Here's a video of my pool time with Mom and Lucie:

Between all the fun I had with Audrey and Lucie on Saturday, it's little wonder that I was so tired out that I almost slept 12 hours that night. I slept all the way until 8 in the morning, which is the first time I've done that in months! You're welcome, Mom and Dad.
Posted by Julia at 10:02 AM