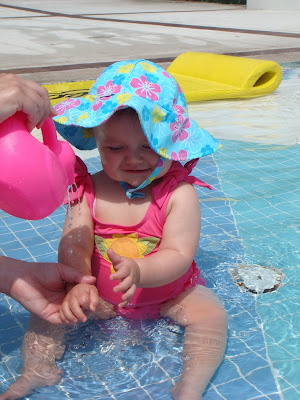 By today, I was fairly certain that we had actually moved to the resort, and that this was going to be my new life from here on in: swimming, napping and hanging out with my Sesame Street pals. Another daily highlight was waking up in my crib (usually at 6:10 am on the dot), standing up, seeing Mom and Dad, and waving to them. Then Dad picked me up and brought me into bed, where I got in some quality snuggling time with them for a few minutes, before I spotted my toys and ditched Mom and Dad for greener pastures.

Today, we went to a different pool (there were five of them in all). Instead of waterfalls, this one had a baby pool, which meant I could sit in the water, play and take my hat off...

Then I was in for a wonderful surprise: all my Sesame Street friends came by and I was able to take photos with the whole gang at once. I was so giddy! 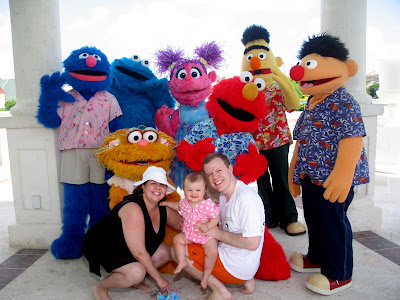 One mantra my parents lived by this week: always make sure Julia had sunscreen. I usually protested, unless I was able to do my own thing with the sunscreen. 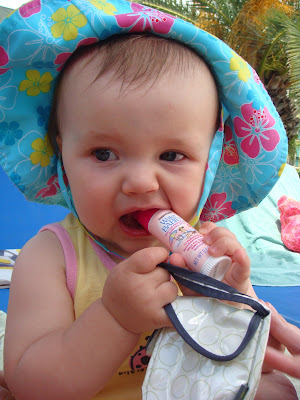 That was the sunstick for my face and hands; I had the same reaction to the regular sunscreen too. 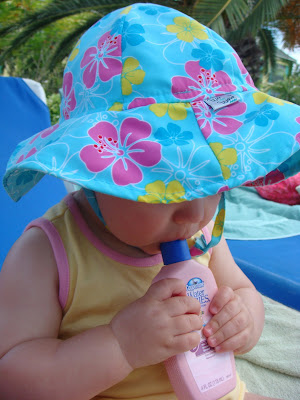 Dad kept wanting to take me on the water slide (which a couple other parents were doing with their infants), but Mom said I was too young. So we settled for something that wasn't as adventurous but was still quite entertaining: going under the pool waterfall into the "cave" behind it. 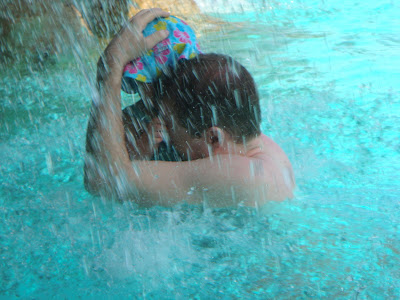 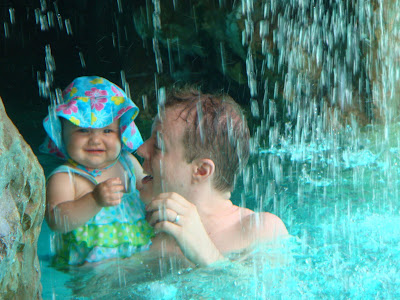 Back at the room, Dad let me wear his hat, which went nicely with my outfit. 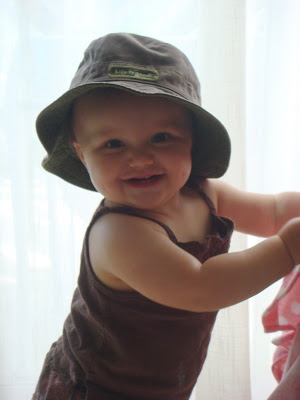 Mom and Dad bathed me every night, to get the chlorine off me, though the baths were brief, because they didn't want me spending too much time in—and drinking—the water. As a result, they were brushing my hair a lot more than usual, and in the process I decided to do the brushing myself.

Here's some more hairbrush merriment, this time with squealing, crawling and (if you listen closely about halfway in) tooting.

I was a bit cranky during dinner (at a seafood restaurant), but perked up when Mom took me to the Sesame Street show. It turned out to be the last show I saw that week, because they don't do them on Friday nights. I got to hug Elmo, Grover and Zoe, and was thrilled to see all three of them. Dad said that Mom and him might have created a monster, now that I have developed such a massive Sesame Street addiction!
Posted by Julia at 8:44 PM