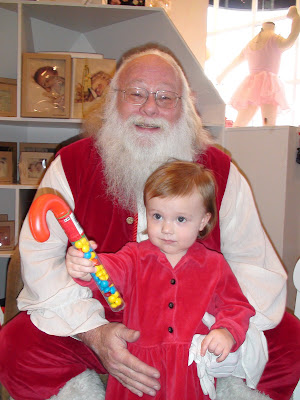 Last year, my fear of white and grey facial hair guaranteed that you wouldn't catch me anywhere near Santa Claus. But a lot has changed since then, so Mom and Dad were curious to see how I would react to Santa this year. So last weekend they took me over to the local baby boutique, where Santa was making an appearance. I went on Friday afternoon with Dad, who took a long weekend and spent five whole days with me.

For the past week or so, I've been recognizing Santa everywhere and saying his name alot, but it's a lot different to actually see the real guy. So when I first saw Santa at the store, I was freaked out and wanted Dad to take me away pronto. Then when Santa started talking to me I actually broke down and cried (I was still about 10 feet away from him at this point). Finally, I calmed down enough to give him five before we left. But a funny thing happened when I got home: I couldn't stop talking about Santa and how he gave me a candy cane filled with M&Ms (whatever those are) and I gave him five and he was so "nice" and he said "ho ho ho!" I forgot all about how I was scared of him. So Mom and Dad took me back to the store two days later to see him again. I was still afraid at first but this time I actually posed for a few photos with him (and got another candy cane). A huge improvement from Friday! Take a look at this video, which includes the aftermath of Friday's meeting and what happened Sunday when I went back to the store.

You don't see it in the video, but Santa even gave me a kiss at the end! Today, Dad took me back to the store to do some shopping, and I was so disappointed that Santa wasn't there. The workers at the store gave me a third candy cane and said that Santa wanted me to have it. So I spent the rest of the day telling Mom and Dad that Santa was "gone." They told me he's very busy this month but that doesn't change the fact that I really miss the guy. I hope I see him again soon!
Posted by Julia at 11:20 PM