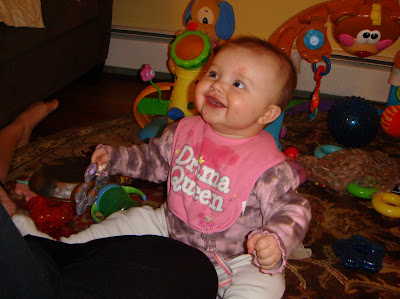 It's time to go through another round of Ask Julia questions. My two most loyal readers wrote in; everyone else, as usual, remained silent. Well, two can play at that game!


Not too much fun, was it? So to those of you who haven't written me in months (or ever!): send me questions, or get used to looking at blank space.

Here's the latest from my Aunt Rebecca:

I know you're wearing a bigger size in clothes now, but once you start crawling more and then walking, your smaller clothes might fit again as you begin to stretch out. Or perhaps you want to compete with Suri Cruise and her wardrobe?
I'd love the chance to drool on some really expensive threads, but no luck so far. Mom and I pointed out to Dad that the baby boutique in town was having a half-off sale; he said that half off of $200 is still a whopping $100. So it looks like the only way I'll find myself in Burberry and other fancy baby labels will be if some kind soul takes pity on a beautiful little girl and sends her some $200 outfits that she'll probably only be able to wear for a month or two until she outgrows them.

Do you think Babcia and Dido pick you up too much, thereby eliminating the need for you to crawl and/or walk?
No way. In fact, I wish they'd pick me up more. They always want to me to do all the hard work myself, trying to crawl and whatnot. I have better luck with Mom and Dad, who try to compensate for not seeing me all day by scooping me up and showering me with kisses. But I've definitely been pulling my weight in the last couple weeks with trying to crawl. I've been on my tummy more in the past two weeks than in the first 7 1/2 months combined!

Did anyone tell you that Grandma loves when you throw your toys all around for her to pick up? She says it gives her great exercise.
Oh, believe me, I figured out that trick long ago. Babcia has gotten wise, though; she usually leaves the toys on the floor. Mom and Dad still pick them up and hand them back to me so I can toss them right back down.

Do you have any more trips planned to The Big Apple?
Probably not until it gets a little warmer. And Dad says I can't call it the Big Apple because New Yorkers don't say that. But I don't live in New York, so I don't understand what he's talking about.

What do you think of the off-season moves the Yankees have made? How competitive are they going to be this year? What about Johan Santana? Would the Yankees be better off with him or without him?
Wow, I've completely forgotten about the Yankees. We'll have to see what this season is like. Could be great, or really ugly if all the young pitchers can't handle the pressure. But I have faith in Job-A, Job-A, Job-A! As for Santana, I know that Dad isn't sold on that trade, so I think it's for the best that the Yankees seem to be backing away from that deal.

Have you been watching American Idol? If so, what do you think about the contestants who can't sing but insist on going on national tv to prove to the world they can't sing?
I haven't seen it; as usual my parents don't let me watch TV. They don't watch the show either. But after seeing my brilliance on the piano, I'm sure you agree that it sounds like a show I should be on.

Any hopes of those "toofers" coming in soon?
Ugh. You've touched on a sore subject, in more ways than one. We've all given up that my teeth will show up anytime soon, which probably means that the next time we check, my full set will be in. But for now, I'm still toothless. I thought Aunt Jessica could work her dentist magic over the weekend when I saw her, but no luck. 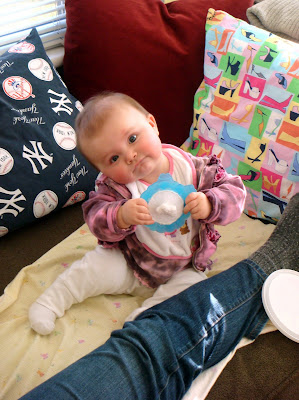 Aunt Paula chimed in with a few queries as well:

Are you still sleeping through the night?
For the most part, yes, although I've been getting up once or twice in the hour or two after I first go down. The real problem lately is been my wakeup time, which has been between 5:30 and 5:45 for the past two weeks. I did manage to "sleep in" until 6:15 this morning, which has Mom and Dad hopeful that I've broken the cycle and will return to my usual 6:15/6:30 routine, but I haven't decided yet what to do.

It looks like your hair is growing very fast. You look so pretty. Do you think you will be wearing ring bows in your hair once it gets a little longer?
Mom says she doesn't know yet. Barrettes, definitely, but the jury's still out on anything else.

Do you have snow? Have you been sled riding lately?
Aside from a fast-disappearing snowfall last week, there's hasn't been any snow to speak of all year. But Dido did get me out there for a quick sled ride before the snow melted, which I loved. Now that I'm more animated about things, I'm looking forward to whooping it up whenever the next snowfall arrives.

How many more weeks of music lessons do you have? Maybe you can show them how well you play the piano.
I've got eight weeks to go. Unfortunately they don't have a piano there (there's a violin and other instruments, but no piano), so the other kids and parents will sadly be deprived of my musical genius.
Posted by Julia at 9:58 PM