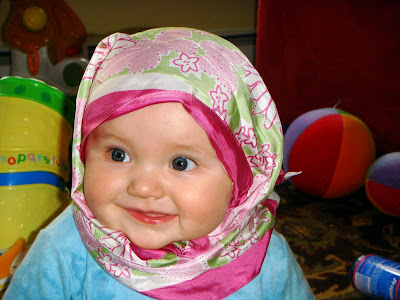 I have lots to update you on later in the weekend, but first let's go through some new Ask Julia questions.

First up, as always, is Aunt Paula's weekly queries:

I sure hope that you are starting to feel better. Have you ever thought about hiding the aspirator? I know that it is good to clear your little nose out but, I know how annoying that little thing can be.
Happily, they spared me the nasal aspirator this week, though no one seems to have any qualms about sticking their fingers into my nose to picking stuff out. Gross! They also use saline drops in my nostrils, which cleans me right out.

Do you have plans for the weekend other than your music lesson? Hopefully, you will just be resting this weekend.
I don't think I have any big travel plans; perhaps I'll just motor around the house looking for the weak spots in the newly-installed babyproofing (more on that later in the weekend).

It looks like you are crawling now. Do you get into a lot of stuff now? Are you getting pretty fast at crawling? I hope to see a video soon of you just scooting along.
My parents are amazed at what a difference just these past few days have made. I'm not crawling too quickly just yet, but all of a sudden it all seems to have clicked for me. I'll see what I can do about showing off for the camera this weekend so we can post some crawling videos for you all to see.

I also was happy to get a note from my Aunt Christa up in Connecticut:
Since you are an avid Yankee fan, I want to know if you think Roger Clemens is telling the truth. He used to be a Red Sox and I am not too happy about the controversy since the Sox are pretty squeaky clean.
The whole thing is very confusing. First off, I don't understand why anyone would voluntarily get a shot, because those things are no fun! Dad says he believed the trainer since his testimony about some of Roger's teammates was truthful, but in the past few days the trainer is starting to sound crazier and crazier...so who knows?
And I don't want to burst your bubble, but I don't think your Red Sox have been as squeaky clean as you think. Let's just say I know people who know people.

That's it for now. Check back later for a much-anticipated look at my new crawling abilities!
Posted by Julia at 10:03 PM