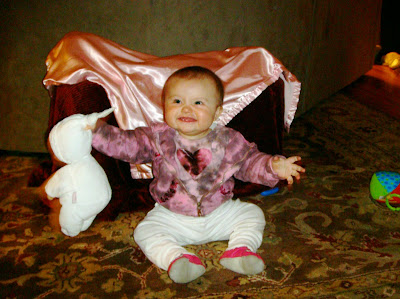 I'm shamefully far behind on updating you about my recent milestones (come on, did you think I was just going to rest on my laurels after I learned to crawl?). So I'm going to kick off a potentially recurring feature—prompted by a certain inspirational campaign-related video that's become a huge internet sensation—called Yes I Can.

YES I CAN...pull myself from a sitting position up to a standing one. I've been doing this for two weeks now can do this holding on to anything my same level, and things a bit taller, like my Learning Playground. And just today I'm finally able to do much taller objects, like while sitting in my pack n play, keeping the top rail and hoisting myself all the way up. 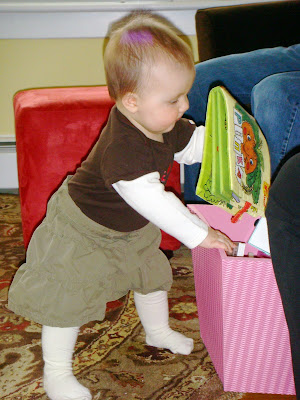 YES I CAN...climb stairs. I did it for the first time last weekend when Grandma and Grandpa were here. The one problem is that after I have climbed one step, I forget that I'm elevated, and I start leaning back a little to take a break. Ooops! Good thing someone is always there to catch me (so far).

YES I CAN...sleep on my stomach, which I've been doing more and more in the past week. I also like sleeping while my head is shoved up against one of the crib corners.

YES I CAN...flip over during diaper changes. Now that Flutterbug isn't around to distract me, I don't stand for laying on my back on the changing table like I used to. Mom is threatening to pull out the changing table strap to keep me steady. I say she's bluffing.

YES I CAN...read books. Well, I pick out a book, flip through some pages, then discard it and move on to another book. 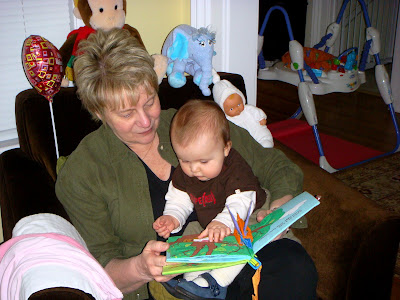 YES I CAN...say "Mama." It's more like "Mamamamama," just like I've been saying "Dadadada" for a while now, but at least Mom doesn't feel left out anymore. And by the way, Mom and Dad haven't decided yet whether either of those counts as a first word yet (probably not).

YES I CAN...slam the bedroom door on Mom and Dad. I've been playing with the door, and on Monday when Mom was a few steps away, I shut the door, leaving me in the bedroom and my Mom outside in the hall. Then I moved up near the door and plopped myself down so Mom couldn't get in. She was telling me to move but I just kept laughing because she was so silly. Then Mom finally got the door open a crack and tossed a new diaper across the room. I couldn't resist—I crawled over to it, allowing Mom to get back in. Dad couldn't quite understand how Mom could be thwarted by an eight-month-old, so I did the same thing to him a few days later (I didn't barricade the door this time, but I still shut him out). I'll be doing a lot more of this when I'm a teenager.

YES I CAN...point at people, with one finger. Dad hasn't gotten this one on video yet, but he'll try this week.

YES I CAN...keep my eye on Dido's Sudoku book and swipe it when he's not looking. 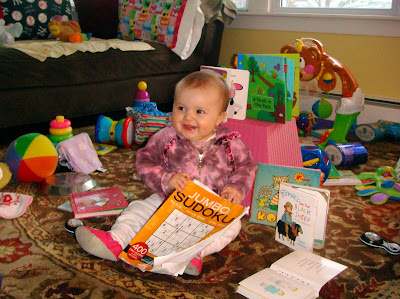 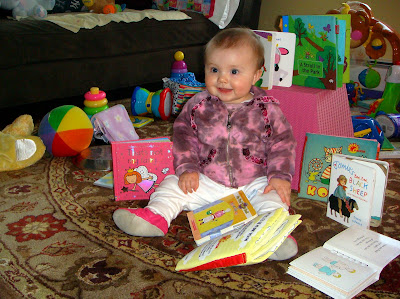 but then turn on a dime and pout when I don't get my way. 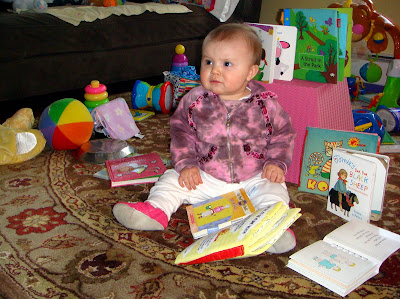