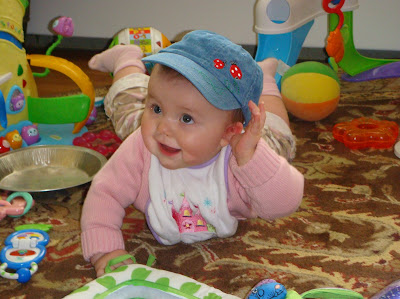 I have a video that I was going to save until the weekend, but Dad pointed out even though he shot it less than two weeks ago, it's already a bit of a relic. As in, wow, remember way back at the beginning of the week when I stayed in a sitting position for minutes at a time—and didn't immediately start crawling around and getting into mischief? Because as of this week, the crawling/mischief combo now tops my agenda!

Even though it's not up-to-the-moment, I still love this video because I managed to combine several of my greatest hits: head-tilting, waving, hair-pulling, squealing...it's all in here!